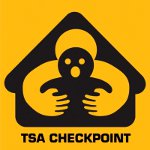 One Response to “TSA’s Image Problem”