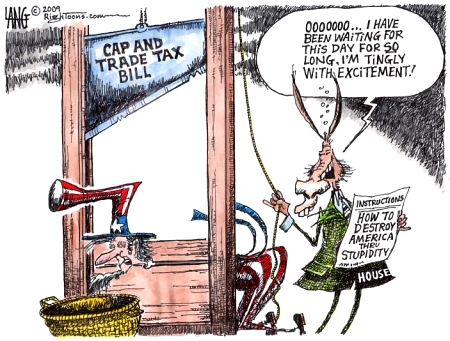 The rogues gallery is as follows: 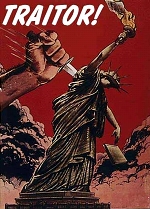 These eight are worse by far than the 212 Democrats who also voted against America by passing the American Clean Energy And Security Act.  No American could expect those Liberals to do otherwise; a scorpion must be true to its nature. But for eight Republicans, elected by Americans to represent Americans against the Liberals to turn coat in this manner is utterly unconscionable.

I urge all true and right thinking Americans to whatever steps are needful to remove these eight from office and to punish them for their betrayal. Make their lives an affliction beyond their bearing.

Make no mistake, the American Clean Energy Security Act aka the Waxman-Markey bill is a destructive and confiscatory tax that will do incalculable harm to our nation all under the false flag of combating Global Warming.  While such a tax would always be destructive to America, it is especially so now during our current economic downturn or recession.

Do any of us really think that America will survive in any fashion that we can still recognize after this level of damage has been done to our core economic infrastructure? Every increase in energy costs results in a commensurate increase in anything that requires energy to create and/or distribute.   Can you think of anything that is part of everyday life that doesn’t “cost” CO2?

It behooves those of us who were raised to be Americans to accept the sad and horrid fact that our nation has run its course. A new thing, cancerous and vile, has arisen from its ravished remains and it is recognizable only in its mockery.

We Americans must now choose: we can go gently into that long night; we can strive to rebuild what has been lost, stolen, or raped from us; or we can accept our loss, but wreak such vengeance upon our enemies that the world learn the price of evil.

This entry was posted on Saturday, June 27th, 2009 at 12:13 pm and is filed under Politics, The Environment. You can skip to the end and leave a response. Pinging is currently not allowed.

5 Responses to “The Maggots Rejoice”