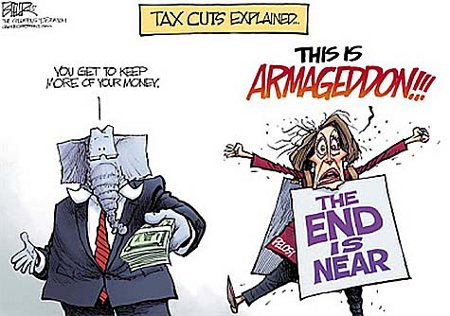 By the sounds and sheer volume of the ranting, raving, and bleating by Liberal, Progressives, and their chosen politicians, the Democrats, you’d think we were facing Armageddon or, in this cases, Taxcutageddon. Nancy Pelosi is just the most extreme and least sane of the lot; the majority of our domestic enemies are squealing the same idiocies about the GOP’s tax reform bill, the “Tax Cuts and Jobs Act.”

Of course, for the Left, the vast majority of Americans who actually pay federal income tax getting approximately a 9% reduction in federal income taxes, along with a simplified tax code is “the end of the world” when combined with some wealthier people getting a greater reduction and companies, both “S” and “C” corporations getting significantly reduced federal income taxes. Then, when you’re all about “Income Inequality,” anything that betters the prospects of the Makers, even if it also benefits most others, is an existential threat.

This entry was posted on Wednesday, December 20th, 2017 at 2:45 pm and is filed under Politics. You can leave a response, or trackback from your own site.