The simple fact that America’s government-run school system is broken and that educational failure is their sole legacy can’t be truthfully argued against. The only arguments that can be engaged in are: why? who’s to blame? and how do we fix or remake it?

It’s easy to blame technology. After all, why should teachers actual teach what students can use modern technology to do for them instead? 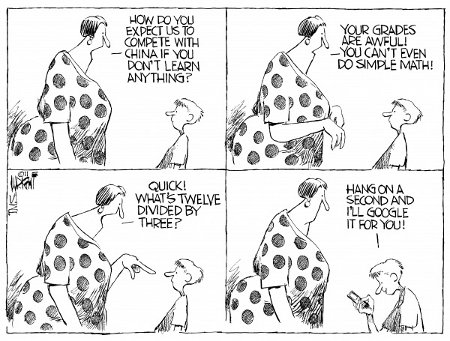 But They Didn’t Teach Us That In Ethnomathematics! 😳

I don’t think it’s fair to blame technology though since the average child in America could recite chapter and verse of the Liberals’ politically correct versions of history and sociology how America was wrong and how the country was based upon the evils of: racism, xenophobia, homophobia, religion, nationalism, and capitalism.

Oh yes! Religion (except for Islam post 9/11), nationalism, and capitalism are taught as “evils” in the modern (re)education camps the Liberals demand we call schools.

That same child could also likely parrot his “teachers'” chimera that teaching math and science and testing on those subjects is racist because it can’t take into account the differences in cultural backgrounds of non-White students. He or she could also offer strikingly similar rationalizations as why all the “teaching” was done to the lowest common denominators in his or her class.

No. Technology may be an enabler in this educational failure but it’s not the cause. The cause is the Liberals’ desire to indoctrinate children into their anti-American ideology.

This entry was posted on Thursday, February 9th, 2012 at 9:11 am and is filed under Politics, Society. You can leave a response, or trackback from your own site.