Gary Varvel’s cartoon from the December11, 2009 issue of the Indianapolis Star provides what the Hierophant of Global Warming has failed to give his cultists, the Warmist – a prayer. 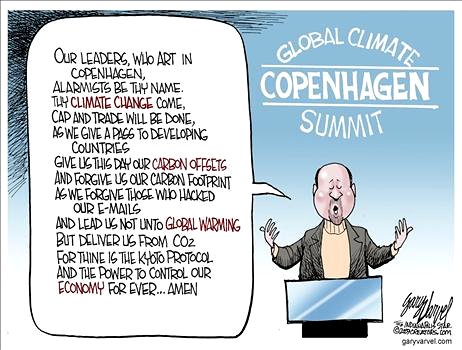 Al Gore’s Cultists,The Warmists, Now Have A Prayer To Chant

This was really the only thing that the Anthropogenic Global Warming (AGW) were still lacking. Al Gore’s apocalyptic cultists already have the blind faith, strict dogma, and holier-than-thou attitudes. All they were lacking was prayer.

Hellfire! They had even learned from the Catholics of bygone days and were setup to sell Indulgences in the form of Carbon Credits…. 😆

This entry was posted on Monday, December 14th, 2009 at 3:13 pm and is filed under Humor, Politics, The Environment. You can skip to the end and leave a response. Pinging is currently not allowed.