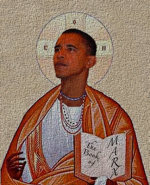 All messiahs need prayers in their names in order for the adherents of their religions and/or cults to reaffirm their faith in those messianic figures. President Obama is, of course, no different from the others in this regard.

Of course this is still America and Americans have a strong tendency to fight against idolatry and often mock such examples of cultism. Hence, not all the prayers will  be such as Obama and followers might like. 😉

Obama is the shepherd I did not want.
He leadeth me beside the still factories.

He restoreth my faith in the Constitution.
He guideth me in the path of unemployment for his party’s sake.

Yea, though I walk through the valley of the bread line,
I shall fear no hunger, for his bailouts are with me.

He has anointed my income with taxes
My expenses runneth over.

Surely, poverty and hard living will follow me
all the days of my life,
And I will live in a mortgaged home forever.

I am glad I am American, I am glad that I am free.
But I wish I were a dog …
And Obama was a tree.

It’s also amusing that President Obama has his own Prayer Team which is founded by members of his myrmidons, Organizing For America (OFA).

This entry was posted on Thursday, December 17th, 2009 at 10:24 am and is filed under Humor, Politics. You can skip to the end and leave a response. Pinging is currently not allowed.