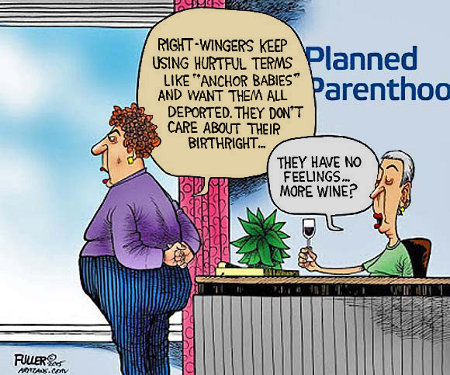 And the greatest irony is the Liberals and Progressives – ever so fond of infanticide aka abortion – seem to feel, judging by the vitriolic rhetoric, that the underlying issue with the term, “Anchor Babies” is that it dehumanizes the results of the illegal aliens’ gestational tourism.

This entry was posted on Thursday, August 27th, 2015 at 7:29 am and is filed under Humor, Politics, Society. You can leave a response, or trackback from your own site.

Hillary’s ideas about what constitutes America’s values seem a bit skewed away from both the normative and the Liberals’ and Progressives’ antithetical counter-values.

Of course Hillary is infamous for her “floating point” values and for “triangulating” them to fit her audience and to what will benefit herself the most at that time.

Still, her campaign’s position on the longstanding term, “anchor babies” is a departure from Hillary’s normally carefully crafted to be meaningless positions and rhetoric.

During a press conference today, Jeb Bush tried to outdo Donald Trump and other Republican presidential candidates by doubling down on the hateful term ‘anchor baby’ when referring to the U.S. born children of immigrants.

It’s a disgrace to see these candidates attack a group of American citizens who not only have the same rights as everybody else in this country but also represent the very values this country was built on.

So, apparently Hillary’s campaign believes that criminally violating a sovereign nation’s borders and breeding within them to ensure that one will not be forcibly ejected are very values this country was built on. That’s a sharp, leftward departure from the traditional American view.

It’s also a broad drift from her Leftist base’s normal position as well since the only things even remotely resembling illegal immigration and the breeding of anchor babies that has ever been condoned or accepted by the American people is the original colonization of America by European immigrants and our later westward expansion, both of which resulted in the destruction of the continents original, indigenous peoples. Last I heard, those Liberals and Progressives were pretty dead-set on stridently reviling those bits of history.

As usual, Hillary’s views of America’s values are her own and don’t match up with the normative stance. At least not when her mouthpiece to the Hispanics, Lorella Praeli – herself an anchor baby – is speaking to a group of Hispanic agitators, most of whom are illegal immigrants, anchor babies, or accessories to illegal immigration.

This entry was posted on Monday, August 24th, 2015 at 9:20 am and is filed under 2016 Election, Politics. You can leave a response, or trackback from your own site.