I love tequila. Some days – too many this year so far – I take in double shots. But this is 2020 and memory is totally overrated. Time to break out Red Eye Louie’s Vodquila and wash the year away.

This entry was posted on Thursday, October 29th, 2020 at 4:21 am and is filed under Humor. You can skip to the end and leave a response. Pinging is currently not allowed.

I’m a big fan of vodka; it’s one of my preferred spirits. There is one brand, however, that despite its quality, reasonable price, and easy availability that I do not purchase nor allow my family to do so – not that they would in the first place. That is Absolut, which was once one of my staple brands of vodka. The reason for my boycott is clear and simple: 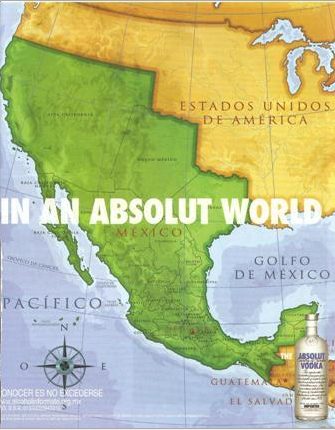 If in an “Absolut World” Atzlan has completed it Reconquista of the American Southwest, or even if they just thought that such an ad was appropriate to use in Mexico then they are the enemies of America.

Since I do not lend aid and comfort to the enemy, I do not purchase their products and encourage all other Americans to do the same.

When bad men combine, the good must associate; else they will fall one by one, an unpitied sacrifice in a contemptible struggle.

Treason takes many forms, not all of which are obvious. One of the worst and easiest to commit is lending tacit support to America’s foreign or domestic enemies by doing any form of business with them whatsoever or lending them any aid or support even by proxy.

This entry was posted on Saturday, August 14th, 2010 at 9:50 am and is filed under Food & Drink, Politics, Society. You can skip to the end and leave a response. Pinging is currently not allowed.