The bulk of the Liberals love the fact that President Obama has sued Arizona over SB 1070. This is for a variety of reasons, all of which mark them as enemies of America.

I’ll say this for them though – they’re consistent in their faith, however vile and anti-American that it might be. 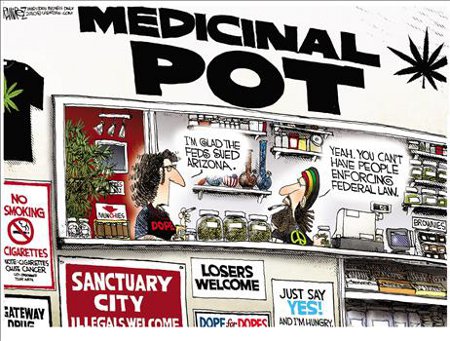 Fortunately for them their President isn’t near so consistent when it comes to upholding his Oath of Office and executing sworn duties. He’s proven more than eager to wage a paper jihad against Arizona’s attempt to defend the safety of American women and children by enforcing the federal immigration laws – laws the Obama Regime has refused to enforce – but has been utterly sanguine about- and supportive of California actively flouting and contravening federal drug laws.

Of course Obama swore his Oath of Office upon a copy of the Christians’ Bible and I sincerely doubt that he considers such to be binding upon him; his theology seems to lay elsewhere. 😉

But Obama does possess a deeper level of consistency that is shown by his actions and the people he has surrounded himself with, and this consistence of agenda sits well with- and lends material aid and comfort to his followers and constituency.

The Obama Regime’s and his followers’ newfound love of inconsistent enforcement of America’s laws when it suits them is a dangerous course of action for them. The idea that “bad laws” just shouldn’t be enforced is based upon subjective values and such a mindset stands a good chance of running afoul of the Law of Unintended Consequences.

This entry was posted on Sunday, August 15th, 2010 at 9:18 am and is filed under Politics. You can skip to the end and leave a response. Pinging is currently not allowed.