It’s looking like the days of fake meat may well be coming to an end. The Liberal/Progressive Eco-Fascists’, Climatards’, and Food Nazi’s dream of normalizing – and, of course, later mandating – plant-based “meat” products seems to be failing hard, wrecked upon the rocks of basic economics.

Beyond Meat is cutting its workforce by a 19% – approximately 200 employees – in a desperate move to slash eight figures’ worth of spending from its operation in order to survive it’s revenue collapse, which is now projected to be down by as much as $120 million (9-14%) from a year ago.

This failure is about as surprising as politician either lying or finding a way to “tax” more of your money. It’s simple economics. Fake meat is just too expensive; the only ones buying are the privileged coastal elites. And, even for them, it’s more about virtue signalling and supporting a Left-wing cause than wanting to eat the stuff. Certainly all attempts to mainstream fake meat have failed, with only 54% of people even trying vegetable-based meat alternative offerings at more blue-collar restaurants.

It’s really quite simple. It’s basic, almost remedial, economics. Any product that only appeals to a small number of potential customers and is necessarily priced above the pain point for the majority of people is doomed to either failure or being restricted to a small, niche offering.

And, given that the same Liberal and Progressive coastal elites that made a market for fake meat did so as a moralistic attack on normal people and as a way of entrenching their Warmist ideology, very few will miss this industry at all.

This entry was posted on Friday, October 21st, 2022 at 5:00 am and is filed under Food & Drink, Society. You can skip to the end and leave a response. Pinging is currently not allowed.

If Veggies Are So Good

A generation or more long question that Vegans refuse to answer – if veggies are so go good, why do they keep trying to make them taste and look like meat and why does Vegan food taste so horrible?

It makes no objective sense. It’s not like there’s not a plethora of damn fine, damn tasty and satisfying vegetarian foods available around the world. So why does Vegan food – and I mean specifically Vegan Food – so often turn out to be poor and disgusting mockeries of normal, omnivore cuisine. It seems to me the answer – never provided by the Vegans themselves – would be important for the bulk of society to know.

NOTE: I, myself consume on average just under 16 oz of red meat a week (far less in Summer, a bit more in Winter), just over that in poultry and seafood, and much more than that in well-prepared vegetables. So, I’m hardly a knee-jerk carnivore. 😛

This entry was posted on Saturday, September 24th, 2022 at 5:00 am and is filed under Announcements. You can skip to the end and leave a response. Pinging is currently not allowed.

Sadly, the above ad is fake. I would have adored it if it was an actual whimsical – or mocking if you’re of the flat-toothed dietary persuasion – but, alas and alack, neither the advertisement nor Crompton’s Beef Farm are real.

This entry was posted on Tuesday, July 20th, 2021 at 12:33 pm and is filed under Food & Drink, Humor, Society. You can skip to the end and leave a response. Pinging is currently not allowed. 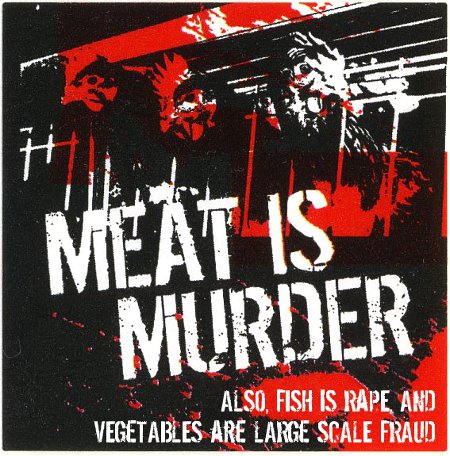 As ridiculous as it is to scream, “Fish is rape!” it makes almost as much sense as what the ever-annoying and self-righteous vegans rant, scream, jabber, and whine on an almost daily basis. 😉

This entry was posted on Saturday, April 7th, 2012 at 8:36 am and is filed under Food & Drink, Humor, Society. You can skip to the end and leave a response. Pinging is currently not allowed.