In the ongoing struggle of the Liberals against the now past administration of President George W. Bush the argument over the interrogation of the terrorists held at the Guantanamo Bay Detention Facility (Gitmo) continues to rage. The Liberals are determined to see President Bush, Vice-President Cheney, and a host of other Americans tried for the crime of torture.

Conservatives are similarly determined that, if these people are tried on the charges of torture, then Speaker of the House Nancy Pelosi and a number of other Democrats who knew of the techniques being used and failed to dissent despite having oversight of the proceedings are tried as well.

Since both sides – Liberal and Conservative – of the argument are trying to use the law to attack their enemies, it behooves us to know that law. Under United States law torture is a federal crime and is defined under Title 18, Part I, Chapter 113C of the US Code:

(1) “torture” means an act committed by a person acting under the color of law specifically intended to inflict severe physical or mental pain or suffering (other than pain or suffering incidental to lawful sanctions) upon another person within his custody or physical control;

(a) Offense.— Whoever outside the United States commits or attempts to commit torture shall be fined under this title or imprisoned not more than 20 years, or both, and if death results to any person from conduct prohibited by this subsection, shall be punished by death or imprisoned for any term of years or for life.

(b) Jurisdiction.— There is jurisdiction over the activity prohibited in subsection (a) if—

(c) Conspiracy.— A person who conspires to commit an offense under this section shall be subject to the same penalties (other than the penalty of death) as the penalties prescribed for the offense, the commission of which was the object of the conspiracy.

Read the law as it is written above (please, refer to the source for proof) and either weep, rage, or laugh as it pleases you to do. Anyone’s hope of prosecuting anyone involved in what happened at Gitmo is in vain, dashed to oblivion upon the reality of American law.

Then there’s the specifics of the offense of torture. The “enhanced interrogation techniques” used at Gitmo do not meet the legal definition of torture under Title 18, Part I, Chapter 113C, § 2340A of the US Code. The US Code specifically define a person subject to being charged with the offense of torture as, “Whoever outside the United States commits or attempts to commit torture….” This means that the statute only applies to actions that take place outside of America.

The detention facility at Guantanamo Bay is a US possession and therefor qualifies as being within the United States per Title 18, Part I, Chapter 113C, § 2340 of the US Code.  Nobody at Gitmo was outside of the United States for the purposes of the statute and so they cannot be charged under it.

So…we can’t prosecute anyone under US law for “torturing” the illegal combatants and terrorists held at Gitmo. US law is written in such a way as to prevent this from happening.

This entry was posted on Monday, May 18th, 2009 at 11:21 am and is filed under Politics. You can skip to the end and leave a response. Pinging is currently not allowed. 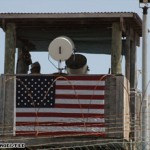 President Obama is off to a quick start as the 44th President of the United States. I’ll give him credit for rolling up his sleeves and getting right to work.

Today, Thursday January 22, 2009, Pres. Obama issued three (3) separate executive orders dealing with the Guantanamo Bay detention camp – aka Gitmo – and the interrogation techniques that will be allowed in the future under his administration and US law.

This is an action on Obama’s part that will make a lot of his constituency happy. The Liberals had nothing good to say about Gitmo or the US’ current methods for extracting information out of the terrorists, terrorist sympathizers, and illegal combatants detained at Guantanamo Bay. Even many more conservative and pragmatic Americans like myself welcome Gitmo’s closing, if for different reasons than Liberals.

But before the Liberals get too happy and the more militant and/or Utilitarian Conservatives too angry, one should see how this reduction in the US’ repitoire for dealing with- and extracting critical information from our terrorist enemies is set to play out.

According to David Espo, an AP Special Correspondent, at least two more executive orders are expected in coming days, according to two Obama officials who of course spoke only under the condition of anonymity.

So Pres. Obama wants to eliminate the US’ alleged use of torture to interrogate terrorists and illegal combatants – at least from a legal perspective. He may or may not be intending to dramatically alter what interrogation methods are allowed to the CIA and the rest of intelligence community. I wonder just how the his more Liberal constituency is going to like this latest departure of Obama’s from the ideology they projected onto him?

Personally, I’m strongly against making such changes to the U.S. Army Field Manual. It’s one thing to tacitly condone trained and hopefully dispassionate professionals from the intelligence community using harsh techniques to interrogate prisoners / detainees. It’s quite another to explicitly allow such methods to the military who will often be operating in emotional and heated conditions in the field. I don’t like the possible ramifications of that, both to others and to our troops.

This entry was posted on Thursday, January 22nd, 2009 at 2:09 pm and is filed under Politics. You can skip to the end and leave a response. Pinging is currently not allowed.