In ancient Rome, when a great victory was achieved the leader of the Roman forces was rewarded with a Triumph.  The celebrated commander would be called the triumphator.

The ceremony honoring the triumphator consisted of a spectacular parade, opened by the doomed chiefs of conquered peoples, followed by wagon loads of gold and other spoils captured during the campaign, musicians, dancers, and placards drawn with scenes of the war. Then followed the victorious general at the head of his troops

The triumphator rode on a chariot, known as a biga,  pulled by two white horses.  A slave behind the triumphator held a laurel crown over his head, but not touching it. This slave’s primary duty beyond holding the crown was to repeat continuously “Memento mori.” – Remember thou art mortal.

I’m often amazed at the fundamental wisdom of the Romans. They knew that great triumphs and the shouted and repeated adulation of the masses would lead even a seasoned and well grounded  person down the path to hubris, megalomania, and eventual costly failure. 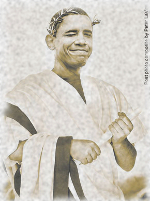 With his recent victory and the almost cult-like adulation of many of his followers, who in America needs this service more than our newly installed 44th President, Barack Obama? I think all of our Presidents should have had some walking beside them offering this reminder, but Obama needs it more than most.

He’s young, inexperienced and has had a meteoric rise in power. All this accomplished with the accompaniment of adoring crowds chanting his name and singing paeans in his honor.

With no disrespect intended towards Pres. Obama, I think it will be difficult for him not to start believing his own press. Harder still for him to remember that he is but a President, not a savior of America or the messianic figure that he his held to be many of the masses.

For your own sake and the sake of the nation you now lead, Mr. Obama, “Memento mori.” – Remember thou art mortal.

This entry was posted on Thursday, January 22nd, 2009 at 9:59 am and is filed under Politics. You can skip to the end and leave a response. Pinging is currently not allowed.