Obama, his handlers, and his cultists have been attacking GOP Presidential Nominee, Mitt Romney over his time with Bain Capital. As is usual for the Left, they continue to attack Romney because he was a successful businessman, something that Obama has never been even close to being. 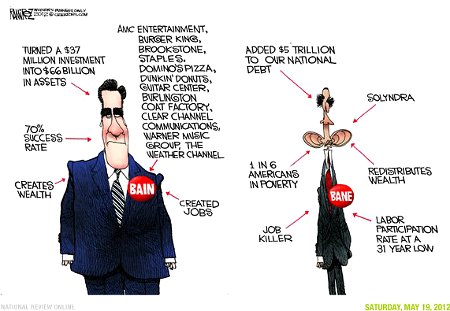 Americans have a choice in November. We can support Mitt Romney with his strong background in turning around failing businesses and saving what could be saved, or we can let the Liberals reinstall Obama to the Presidency and allow him to continue to drive America’s economy off a cliff.

It is our choice, not that of the Liberals, Progressives, or their minority tenants’ who will decide the immediate future of the United States of America. Will it be Bain or Bane?

This entry was posted on Sunday, May 20th, 2012 at 8:50 am and is filed under 2012 Election. You can skip to the end and leave a response. Pinging is currently not allowed.

9 Responses to “Bain or Bane”