OK, to start with, there’s no rap in this video. I used “Rap” in this post’s title solely because rap is a unique Black corruption of music, which plays well with Obama’s unique corruption of the office of President. 😉

That being said, this video of Saturday Night Live’s mockery of Obama’s executive orders and how they are designed to overturn the law as enacted by Congress is hilarious.

SNL’s bit of sketch comedy aptly mocks and lampoon’s the boy’s overreach, would-be tyranny, and general thuggery as it pertains to immigration and Obama’s disregard for both the law and the constitutionally mandated limits on executive power. Rarely has SNL delivered such a well-deserved bit of disrespect for the man holding the office of POTUS. 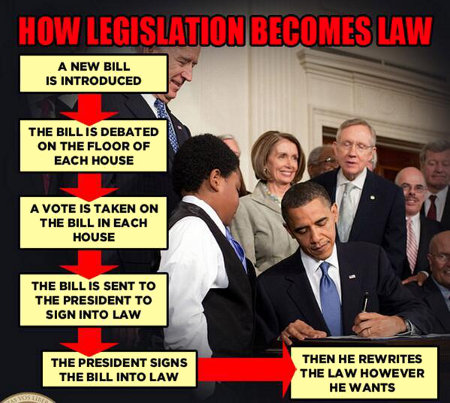 Making Law Under The Obama Regime

The thing is that Obama has never much concerned himself with the law. Frankly, the boy seems to hold the law in contempt, enforcing it or not as he sees fit and changing said laws via executive fiat whenever he so chooses to.

This makes Obama worthy of mockery, disrespect, despite, and disdain…at a bare bones minimum that represents more truly Americans’ tolerance and tendency to give the hand-out of excuses to America’s First Black President than anything else.

This entry was posted on Monday, December 1st, 2014 at 9:49 am and is filed under Humor, Politics. You can skip to the end and leave a response. Pinging is currently not allowed.