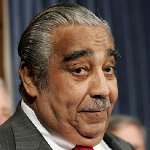 Rep. Charles B. Rangel (D-NY) has been convicted on 11 of 13 charges of violating House ethics rules and bylaws.  Now the inveterate “playa,” founding member of the racist organization known as the Congressional Black Caucus, and “representative” for Harlem will face what amounts to a sentencing hearing before the entirety of the House Ethics Committee, who will pass on their punishment recommendations to the House.

Don’t expect much of anything to come of this though, despite the relative seriousness of the ethics violations that Rangel has been found guilty of.

Rangel Was Convicted Of The Following Counts

Count 1: Violating solicitation and gift ban: Soliciting donations and other things of value on behalf of the Rangel Center from persons or entities with business before him or his Ways and Means Committee.

Count 2: Violating code of ethics for government service: Accepting benefits under circumstances that could be construed as influencing the performance of his governmental duties, with respect to soliciting donations and other things of value on behalf of the Charles B. Rangel Center for Public Policy at City College of New York.

Counts 4 and 5, merged into one count: Violating postal service laws and franking commission regulations: Mr. Rangel was accused of using his franking privileges for the benefit of a charitable organization and for solicitation of funds.

Count 9: Violating Ethics in Government Act and House Rule 26: Mr. Rangel submitted incomplete and inaccurate financial disclosure statements, and failed to report or erroneously reported items he was required to disclose under the Ethics in Government Act from 1998 through 2008. In particular, Mr. Rangel amended certain financial disclosure statements only after a House committee began investigating his reporting of income from his Dominican villa.

Count 10: Violating code of ethics for government service: Mr. Rangel leased a rent-stabilized apartment on Lenox Terrace in Harlem for residential use only, but was allowed by the landlord, a developer whom Mr. Rangel dealt with in his Congressional capacity, to use the apartment as office space for his campaign committee. The arrangement could be construed as influencing the performance of Mr. Rangel’s official duties.

Count 11: Violating the Code of Ethics for Government Service: Mr. Rangel violated the code by failing to report rental income on his Dominican villa.

Count 12: Violating the letter and spirit of House Rules listed above.

Count 13: Conduct reflecting discreditably on the House: Mr. Rangel’s improper solicitations and acceptance of donations for the Rangel Center; his misuse of House staff, letterhead and franking privilege for the Rangel Center solicitations; his failure to file full financial disclosure statement; his failure to report the rental income on his Dominican villa; and his use of his rent-controlled residential apartment for his campaign office all brought discredit to the House.

The House could expel him from Congress over charges such these, but anyone with even half a brain knows that they would never enact such a punishment upon Rangel.

Do not, even for a second, believe that the American people can get justice from Congress or expect them to police their own. The only way we, the People can moderate their behavior is to take matters into our own hands and enact such justice or retribution upon them as we see fit.

This entry was posted on Wednesday, November 17th, 2010 at 11:09 am and is filed under Ethics & Morality, Politics. You can skip to the end and leave a response. Pinging is currently not allowed.