Prayer in Schools – Atheists hate it with a black, bleeding passion, Theists generally want it allowed, and some segments of the Christians – normally referred to as the Religious Right – absolutely demand it.

Not being one of the Godless, I have no hatred for most religious expression and strongly favor prayer being allowed in America’s schools. The Religious Right, however, might just choke on some of the effects of successfully demanding it though. 😉 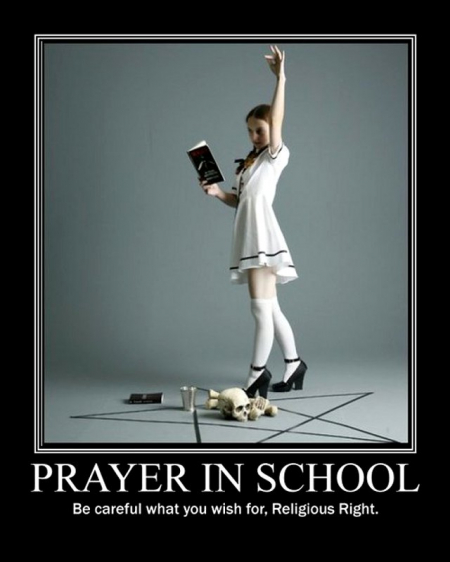 The Three-fold Law & The Law of Unintended Consequences

Yeah, that might just stick in the craws of some people. That being the case and America being a tolerance-based religious plurality, though one de facto founded upon Judeo-Christian values, the phrase, “Be careful what you wish for,” should be kept firmly in mind.

NOTE: Notice how the Pagan schoolgirl’s 1st Amendment right to freely practice her religion has been violated for the sake of the school’s no weaponry policies? She’s been forced to perform her ritual without her athame! 😆

This entry was posted on Wednesday, November 17th, 2010 at 3:19 pm and is filed under Humor, Politics, Religion. You can skip to the end and leave a response. Pinging is currently not allowed.

6 Responses to “Prayer In Schools”