One of the recurring bits of propaganda coming out of the mouths of Obama, Biden, their handlers, and proxies is the tropism that Romney and Ryan, and Republicans in general, want to “take us back” to some past that they hope their base finds objectionable. 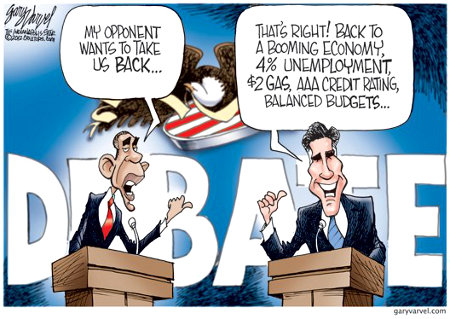 Romney Wants To Take Us Back…

This is actually a brilliant reelection strategy for the Campaigner-in-Chief and his overseers. It conjures up all sorts of horrific fantasies of slavery, bondage, and oppression among the Liberal, Progressive, and minority herds. Better even, for the Obama Regime, the truth of what Romney and Ryan want to take America back is at least equally horrific and objectionable to the Left and their minority sharecroppers.

This entry was posted on Tuesday, October 16th, 2012 at 4:09 am and is filed under 2012 Election. You can skip to the end and leave a response. Pinging is currently not allowed.