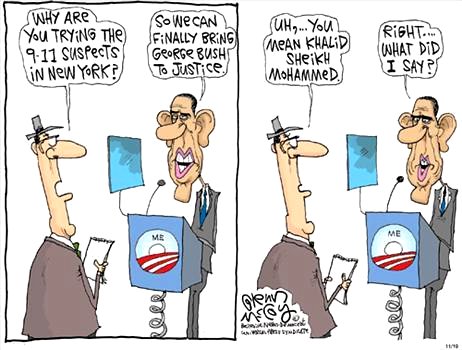 I don’t always wholeheartedly agree with Sen. Lindsey Graham’s position, nor do I always agree with how he goes about speaking to those positions and against those of the opposition; he is often overly vitriolic, hyperbolic, and antagonistic. Sometimes though, it’s a true joy to watch him cut loose on some poor, deluded fool who has no knowledge or understanding of the matters at hand.

His teaching remedial law and civil rights under that law to Obama’s Attorney General, Eric Holder is one of those times.

Sen. Graham spells it out in small words – ones that even Obama’s boy, Holder should be able to understand – what the problem is with President Obama – through Holder – trying terrorists like the vermin, Khalid Sheikh Mohammed, in a American civilian court of law.

If we’re going to use federal court as a disposition for terrorists, you take everything that comes with being in federal court. And what comes with being in federal court is that the rules in this country, unlike military law, you can have military operations, you can interrogate somebody for military intelligence purposes and the law enforcement rights do not attach. But under domestic criminal law, the moment the person is in the hands of the United States Government, they’re entitled to be told they have a right to a lawyer and can remain silent.

It is a great shame that neither President Obama nor Attorney General Holder seem capable of understanding those simple, American truths. One way or another and no matter how the travesty of Khalid Sheikh Mohammed’s trial turns out, the harm these two will likely wreak upon America, if they are not stopped, is staggering.

This entry was posted on Friday, November 20th, 2009 at 11:33 am and is filed under Politics. You can skip to the end and leave a response. Pinging is currently not allowed.