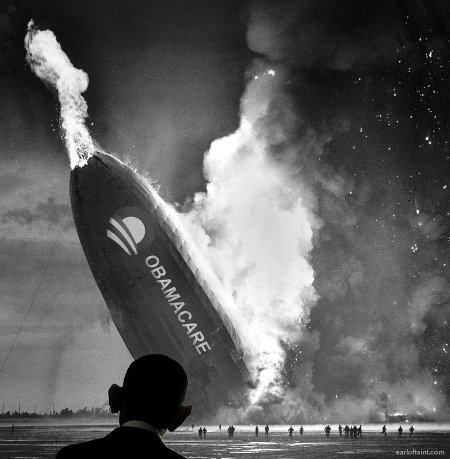 It’s a terrific crash, ladies and gentlemen. It’s smoke, and it’s flames now … and the frame is crashing to the ground, not quite to the mooring-mast. Oh, the humanity and all the patients screaming around here. I told you, I can’t even talk to people whose friends are on there. Ah! It’sâ€“it’sâ€“it’sâ€“it’s … oâ€“ohhh! Iâ€“I can’t talk, ladies and gentlemen. Honest, it’s just laying there, a mass of smoking wreckage. Ah! And everybody can hardly breathe and talk, and the screaming. Lady, Iâ€“I’m sorry. Honest: Iâ€“I can hardly breathe. Iâ€“I’m going to step inside where I cannot see it. Charlie, that’s terrible. Ah, ahâ€”I can’t. I, listen, folks, Iâ€“I’m gonna have to stop for a minute because I’ve lost my voice. This is the worst thing I’ve ever witnessed.

This entry was posted on Thursday, January 16th, 2014 at 8:40 am and is filed under Politics. You can skip to the end and leave a response. Pinging is currently not allowed.