No Nativity In DC!

Every year around the Christmas season there’s an argument within the Beltway about what sort of public observance of the holiday will be done. This year things were a bit more extreme and odder than usual though.

No Nativity Scene in Washington This Year!

The United States Supreme Court has ruled that there cannot be a Nativity Scene in the United States Capitol this Christmas season. This isn’t for any religious reason. They simply have not been able to Find Three Wise Men in the Nation’s Capitol.  A search for a Virgin continues. There was no problem, however, finding enough asses to fill the stable. 😉

Congress and the White House, always ever eager to circumvent the rulings of the SCOTUS, has decided to include the Nativity anyway, just not as a public display. 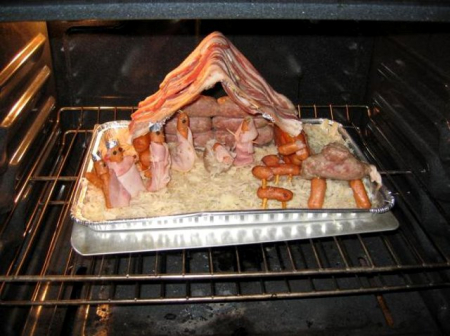 Bacon Nativity – So Wrong But So Porkalicious

That’s right; they’ve figured out a way of combining their two great loves: feeding from the public trough and an endless supply of pork with their holiday celebrations.

This entry was posted on Monday, December 13th, 2010 at 11:06 am and is filed under Food & Drink, Humor, Politics, Religion. You can skip to the end and leave a response. Pinging is currently not allowed.