When the Muslim female attempted to hijack a Benghazi panel – and got herself well schooled by Brigitte Gabriel – she did bring up one point, irrelevent to the panel discuss but relevant to America and Civilized World.

How can we fight an ideological war with weapons? How can we ever end this war? The jihadist ideology that you talk about, it’s an ideology. How can you ever win this thing if you don’t address it ideologically?

This is relevant because in the war of Islam vs. the Civilized World, especially America, Islam’s jihadis have already won the hearts and minds of the Liberals and Progressives and, by extension, the politicians of the Democratic party within America’s borders. 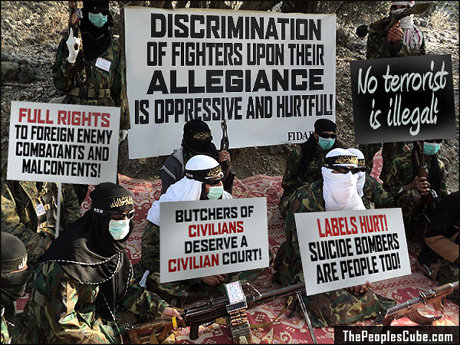 The image above is a very proficient use of Photoshop but there isn’t anything in it that the Left hasn’t said repeatedly, nor is there any call to action in it that the Left has tried their best to realize. Since mere hours after the atrocities of 9/11 the Liberals and Progressives have been siding with Islam’s jihadis and no time in the intervening years has their support wavered or waned.

My fellow Americans, if you love America and love her children you must remember that the Democrats now represent the jihadis and their dhimmi sympathizers against America and you must act accordingly in the fast approaching 2014 midterm elections.

2 Responses to “How Liberals See Jihadis”