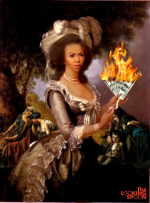 Michelle Obama has always had “issues” with pride and shame. She apparently spent her whole adult life before the 2008 elections being ashamed of America – or maybe it was just “Black America” since she’s always had a streak of racism and racial angst running through her and she did say “her country.” So maybe it was “Black America” she thought was making a comeback. I really couldn’t say.

Be that as it may, it’s nice to see that the FLOTUS is over her issues and that being the First Lady has improved her outlook.

And isn’t it special that she wants to share her new-found pride with we, the People?

For the second time in my adult life, I am not ashamed of my country.  I want to thank the hard working American people for paying $242 thousand dollars for my vacation in Spain.  My daughter Sasha, several long-time family friends, my personal staff and various guests had a wonderful time.

Honestly, you just haven’t lived until you have stayed in a $2,500.00 per night private 3-story villa at a 5-Star luxury hotel.

Thank you for the use of Air Force Two and the 70 Secret Service agents who tagged along to assure we were safe and cared for at all times.  By the way, if you happen to be visiting the Costa del Sol, I highly recommend the Buena Ventura Plaza restaurant in Marbella; great lobster with rice and oysters!  I’m ashamed to admit the lobsters we ate in Martha’s Vineyard were not quite as tasty, but what can you do if you’re not in Europe, you have to just grin and bear it.

Air Force Two (which costs $11,351 per hour to operate, according to Government Accounting Office reports) only used 47,500 gallons of jet fuel for this trip, and carbon emissions were a mere 1,031 tons of C02.

These are only rough estimates, but they are close.  That’s quite a carbon footprint, as my good friend Al Gore would say.  So we must ask the American citizens to drive smaller, more fuel efficient cars.  And drive less too, so we can lessen our combined carbon footprint.

I know times are hard, and millions of you are struggling to put food on the table, and trying to make ends meet.  So I do appreciate your sacrifices, and do hope you find work soon.

I was really exhausted after Barack took our family on a luxury vacation in Maine a few weeks ago.  I just had to get away for a few days.

P.S.  Thank you as well for the $2 Billion dollar trip to India.

P.P.S.  Thank you too, for that vacation trip to Martha’s Vineyard; it was fabulous.  And for the second smaller jet that took our dog Bo to Martha’s Vineyard, so we and the children could have him with us while we were away from the White House for eleven days.  After all, we couldn’t take him on Air Force One, because he might pee on some wires or something.

P.P.P.S.  Oh, I almost forgot to say thanks also for our two-week trip to Hawaii at Christmas.  That 7,000 square foot house was great!  That only cost you guys $4 million. The Mr. wanted to do Camp David! Boring!!!!!!

P.P.P.P.S.  Don’t forget my ski trip to Vail this winter, and now the girls and I are in Africa with my mom.  All this while Barack golfs and campaigns to keep my trips coming for the next 4 years!  Love ya! Remember, we all have to share the pain of these economic times equally!  Love to redistribute – share the wealth.

Yes, the above-quoted email that I received is cruel, sarcastic humor. It is nothing but a snide attack upon Michelle Obama’s lifestyle since being installed in the White House contrasted against her public policy attempts and her husband’s campaign of class warfare. Yet, despite that or because of it, no actual facts presented in it are untrue or far wrong.

The glaring and gross hypocrisy of Michelle Obama wallowing in a taxpayer-funded lifestyle normally enjoyed on by the upper end of the global 1% while exhorting the people paying for her amusements to tighten their belts and exercise discipline in spending, diet, and other personal choices is well worthy of scorn, sarcasm, and snide attacks.

When you add in her husband’s constant pandering to populist classism and his vilifying of the successful in America, her profligate ways reach the point of ludicrousness.

This entry was posted on Tuesday, March 20th, 2012 at 5:52 pm and is filed under Humor, Politics. You can skip to the end and leave a response. Pinging is currently not allowed.