Sometimes you just have to laugh and the recent brouhaha over once again raising the federal government’s debt ceiling is one of those times, especially given the Leftist Media’s portrayal of the conflict – if one wants to avoid a possible psychotic episode. 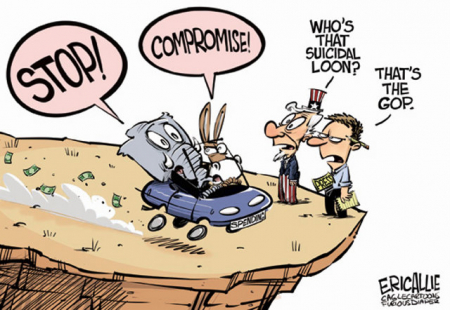 You Can’t Compromise With Crazy or Evil

Of course Eric Allie’s cartoon is less than perfectly accurate. More perfect imagery would include children careful strapped in the car since it’s our children and our children’s children who the Liberals are stealing from.

Of course compromise, even with those who are hell-bent on destroying America so that they can replace it some Liberaltopian non-nation, is possible. I’d suggest stopping the car and throwing the Liberals, Progressives, and the pet media off the cliff. That way we all get what we want. 😉

This entry was posted on Wednesday, August 3rd, 2011 at 5:52 am and is filed under Humor, Politics. You can skip to the end and leave a response. Pinging is currently not allowed.