Obama, his shuffling and stumbling zombie cultists, and his handlers have one, singular quandary – who can they get to pay for their entitlement society after they’ve destroyed and/or driven away the wealthy and the productive in America? 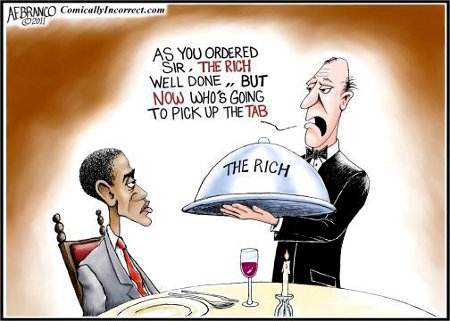 Who’s Going To Pick Up The Tab?

After the Obama Regime, in order to placate the unwashed, unworthy parasites who make up the bulk of America’s domestic enemies, has eaten the rich, who’s going to be left to pick up the tab for his feast?

If one is wiling to look at America’s tax base and tax code, it’s easy to see that it’s shear folly to think that redistributing that wealth downwards will work at all.

On the other hand, if one looks at it as Obama’s last, best hope for reelection, it’s a meal the boy is probably ready to gobble down and not worry about the cost to our nation and our children’s future, or who’s going to have to pay for it.

This entry was posted on Thursday, October 20th, 2011 at 8:44 am and is filed under 2012 Election, Politics. You can skip to the end and leave a response. Pinging is currently not allowed.