President Obama, in an unlooked-for paroxysm of sanity, reached an accord of sorts with the GOP and worked out a deal by which all, or most, of the “Bush Tax Cuts” were extended through 2012. Various Leftists – the Liberals and Progressives – have ranted about this and swear to punish Obama for this action.

Why is this? It’s because, in order to get the concessions that Obama wanted, he had to agree to extend the current tax rate of the top quintile of earners until 2012.

The puling Leftists cannot tolerate this irrespective of the incontrovertible fact that they’re already paying the vast majority of the federal taxes. They want to “eat the rich” and they prefer to do it in bigger bites. 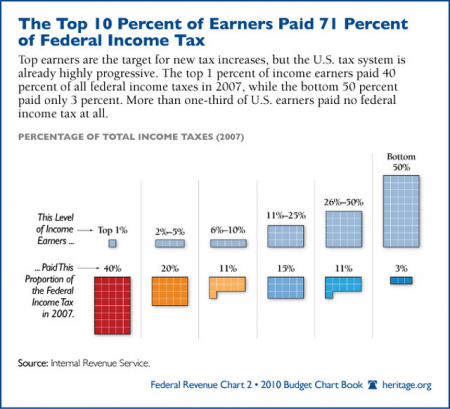 So How Much of the Federal Taxes Does Each Group Pay?

But this is what truly defines the Left – an absolute and visceral hatred of the productive and successful of America and anyone who might support their right to keep as much of what they’ve earned as they possible can.

These domestic enemies of America do not care about what President Obama got in exchange for the “Bush Tax Cuts” being extended for the top earners. They do not care about how many billions of dollars of those Americans’ tax dollars will be spent on extending those cuts and providing subsidies to the less productive elements living within America. All they can see is that “the rich” weren’t penalized for being so.

These Liberals, weened upon hatred of America and a lust for class warfare, cannot understand that, when 20% of the population employs those among the remaining 80% who are willing and able to work, a wise government burdens that 20% lightly so as to increase the odds that they can prosper and bring prosperity to the rest of the society.

This entry was posted on Saturday, January 1st, 2011 at 4:59 pm and is filed under Politics. You can skip to the end and leave a response. Pinging is currently not allowed.

3 Responses to “A Bigger Bite?”