Unfortunately for America it turns out there was some metaphorical truth to Sen. Hillary Clinton’s 3:00AM campaign ad. Sadly, the President of the United States seems determined to sleepwalk through these crises rather than waking up and “taking the call.” 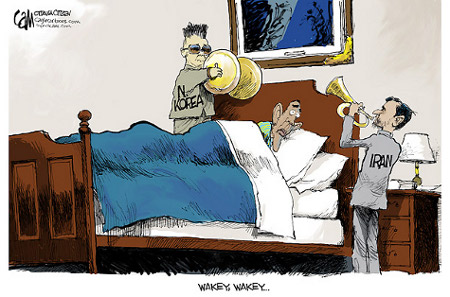 With the rapidly accelerating threat of nuclear attack upon America and/or her allies by either or both of the murderous vermin ruling Iran and North Korea, we are at the point described in Clinton’s campaign ad.

Well, maybe America will get lucky and the Teleprompter will still be on.  If so, hopefully it can manage to deal with the problem its meat puppet has exacerbated. 😉

This entry was posted on Tuesday, July 7th, 2009 at 12:40 pm and is filed under Humor, Politics. You can skip to the end and leave a response. Pinging is currently not allowed.