American, by and large, have not responded philosophically or with equanimity to Obama’s reelection. In response to this the Liberals, Progressives, and the vermin of the “Black Community” have responded with equal parts hate and derision. 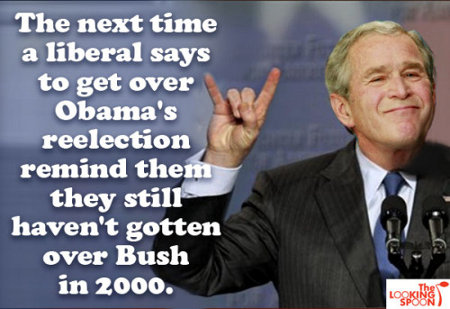 Get Over it? You First, Filth

Liberals and Progressives haven’t yet “gotten over” President Bush Jr.’s first election, and the “Black Community” hasn’t even begun to move past their slavery which ended 147 years ago. Yet they say that Americans should get over Obama’s reelection right now.

But then hypocrisy is one of the Pillars of Liberalism and holding Americans to a different, higher standard than those others living within our nation’s borders is another one. It’s just plain wrong, culturally insensitive, and – following their logic – racist to expect better of them. 😉

So I say, “You first, filth.” I’m not holding my breath though; it’s going to be a long wait.

This entry was posted on Tuesday, November 13th, 2012 at 3:21 pm and is filed under 2012 Election, Humor. You can leave a response, or trackback from your own site.