A powerful government workersâ€™ union will end its support for the United Negro College Fund after the group accepted $25 million from the conservative powerhouse Koch brothers and the college fundâ€™s president appeared at a Koch event.

In a letter made public Thursday, the American Federation of State, County and Municipal Employees said it will no longer partner with or raise funds for the fund, known for its iconic motto, â€œA mind is a terrible thing to waste.â€

This entry was posted on Tuesday, July 15th, 2014 at 7:43 am and is filed under Politics. You can skip to the end and leave a response. Pinging is currently not allowed.

The unruly and largely ineffective mobs of Leftists truly hate the Koch Brothers and stridently declaim about how they’ve bought and paid for so many politicians.

Yet, as corporations go, the Koch Brothers’ campaign contributions pale in comparison to others’. 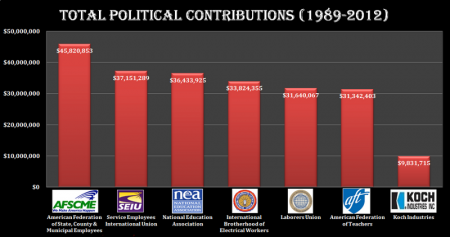 Indeed, the largest class of expenditures by labor unions is political spending, both direct campaign contributions and other forms of a political backing such as television commercials. Yet, of course, Americans will never hear the Liberals and Progressives bemoan that. Quite the contrary, those are corporations that they laud for “purchasing” politicians.

What even more sad than the by now utterly expected hypocrisy of the Left is the fact that Americans allow them to get away with it. Instead of allow them to shape the conversation as they please, Americans should be in their faces hammering them mercilessly with the truth about campaign contributions.

This entry was posted on Friday, January 3rd, 2014 at 11:24 am and is filed under 2014 Election, Politics. You can skip to the end and leave a response. Pinging is currently not allowed.