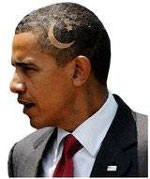 Many people in America think that Obama is a Muslim. Others, mostly his supporters, refute such claims. But, irrespective of the details of Obama’s personal theology, there is no denying that the boy is very sympathetic to Islam, both within America’s borders and across the globe.

In point of fact, Islam is the only religion that Obama has shown any sympathy towards. All other religions, especially the normative Christian sects in America, he seems to hold in disdain.

This is something that the Muslims within America’s borders have taken not of. By a significantly larger margin than any other religion – even the Atheists – Muslims approve of Obama being the POTUS. 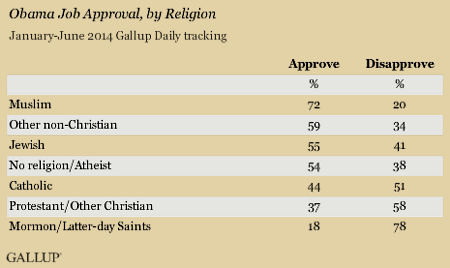 72% Of Muslims Approve Of Obama

Whether or not Obama is actually a Muslim, he’s certainly the Muslims’ President, which raises some serious questions. Can someone who has garnered so much support from Islam’s adherents be trusted to side with America against the Islamists, or is the Muslims’ supporting and approving of Obama one more piece of evidence that the boy is a clear and present danger to America?

With the Caliphate being rebuilt and ISIS vowing to attack American soil, these are questions that can’t wait to be answered and any remedies decided upon must be enacted swiftly and surely.

This entry was posted on Sunday, July 13th, 2014 at 9:37 am and is filed under Politics, Religion. You can skip to the end and leave a response. Pinging is currently not allowed.