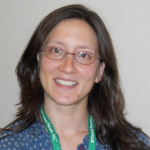 Gina M. D’Andrea Weatherup of Stony Brook, NY, the Community Affairs and Advocacy Manager for Planned Parenthood Hudson Peconic firmly believes that abortion is an intrinsically good thing as opposed to even thinking of it as a lesser of possible evils.

By her own pride-filled admission she’s not even limiting this, as many do, to cases of rape or endangerment to life of the mother.

No; this infanticidal monster is talking about abortion on demand for the sake of women’s convenience being a good thing, a moral choice!

Abortion has value. It is not just the lesser of two evils, but abortion can be a good, moral decision, in and of itself. And I am not talking about cases of rape or life endangerment. I’m talking about everyday women – you, maybe, or your mom, friend, sister, wife, girlfriend, roommate – who simply know that they do not want to be pregnant, and do not want to parent this child, at this time.

The one in three women in America who decide that abortion is right for them deserve to be recognized as people, as full moral agents, and not to be treated like children to need to be taught right from wrong. Women deserve easy access to high-quality, affordable abortion care, without waiting periods, and without biased counseling.

Until abortion is recognized as having value in and of itself, we’re going to continue to battle the Mike Pences, Chris Smiths, and Scott Roeders of the world.

There is one portion of this creature’s drivel that can actually agree with, that the women seeking abortions should not be treated like children who need to be taught Right from Wrong. They are, in fact, full moral agents, are fully culpable for their choices and actions, should be recognized as such by Americans, and deserve to reap the full consequences of those choices and actions.

Gina D’Andrea Weatherup Thinks This Is a Good, Moral Choice

I firmly believe and advocate that, while creatures like this Gina M. D’Andrea Weatherup are allowed to walk free among people of America and promulgate this infanticidal ideology that killing unborn babies is a good thing, our nation needs more people like Mike Pence, Chris Smith, and Scott Roeder. It especially needs more heroic martyrs such as Mr. Roeder who sacrificed himself in order save countless babies from Late-Term Abortion aka Partial-Birth Abortion.

Don’t get me wrong; I have some pity for the girls and women who have either chosen or been coerced by Planned Parenthood’s “Counselors” into choosing to abort their children as a horrible, but still lesser, evil. I don’t even have a strong hatred for Planned Parenthood as a whole; the bulk of their services being necessary gynecological care for poor women.

Things like this Gina M. D’Andrea Weatherup, however, do not deserve pity, compassion, or mercy from anyone and should not be considered just as valid targets, but as primary targets in Americans’ battle for the unborn.

I can’t help wonder if, while in their nice, shady backyard watching their cute little daughter play, Gina and her husband, Chris – I’m assuming that they’re married since she appended his surname to her own – discuss when to have that talk with her. You know, the one about “the birds and the bees, and the D & C’s.” 😉

I also wonder if they’ve preformulated an answer in case their daughter ever asks, “How many of my brothers or sisters did you kill, mommy?”

But she is, in a twisted sort of way, right. Abortion has value. Gina and Chris’ house looks like it probably cost around 500K and abortion and her depraved manner of advocating for it helped pay for it.

This entry was posted on Friday, April 1st, 2011 at 5:45 am and is filed under Ethics & Morality, Politics, Society. You can skip to the end and leave a response. Pinging is currently not allowed.