Supposedly today is the “big” day. The Liberals currently trying to reign of Congress and a fractious American people are going to attempt their two-for-one vote on ObamaCare.

It’s a good bet that President Obama has, carefully out of the People’s sight behind close doors, been attempting to make this legislation a bit more palatable to the 20-some Democrats who still listen somewhat to their constituencies. 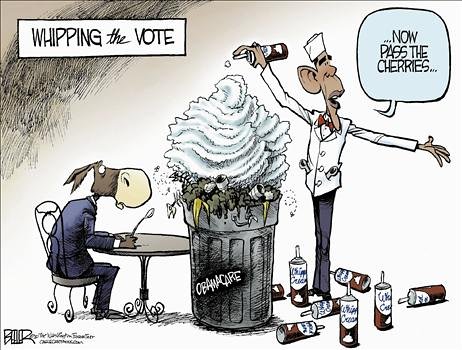 Filth Is Filth, Irrespective Of The Cherries On Top

Americans will just have to hope that these Representatives have enough sense to know that a pile of garbage is still a pile of garbage no matter who many sweet toppings – or bribes – that Obama and his cabal of Liberals pile on top. 😉

This entry was posted on Sunday, March 21st, 2010 at 6:40 am and is filed under Humor, Politics. You can skip to the end and leave a response. Pinging is currently not allowed.