The slackers who make up the active majority of the Occupy Wall St. crowd make not have a manifesto or even a clear cut agenda beyond hating the successful members of American society and wanting the government to punish them and redistribute their wealth, but they do talk about their generalized ideas. 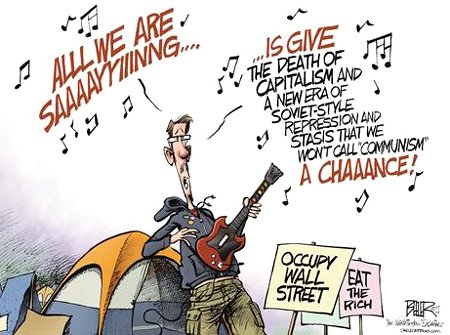 All We’re Saying Is Give State Socialism A Chance

Sadly for them, it’s just the same old Leftist song that Liberals and Progressives have been warbling for decades. Why they think that the tune will be more acceptable to Americans now is beyond rational ken.

When all you’re saying is that you want other people’s money you really shouldn’t want the American people to listen to you. They’ll likely do the right thing and gut shoot you. 😉

This entry was posted on Tuesday, October 11th, 2011 at 12:56 pm and is filed under Humor, Politics. You can skip to the end and leave a response. Pinging is currently not allowed.