As President Obama and coterie of filthy, egotistical Liberals in Congress have shown throughout the war over America’s essential liberties and Healthcare, they are only willing to offer we, the People two choices. 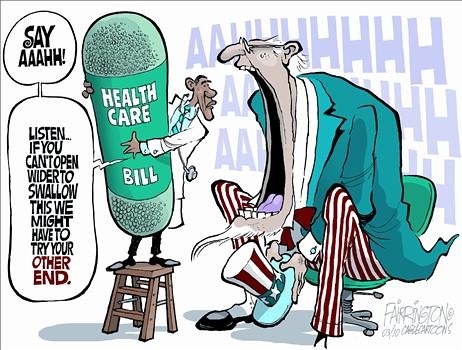 ObamaCare – Open Wider Or We’ll Shove It Up Your Ass, America!

That’s the “choices” that President Obama, Speaker Nancy Pelosi, Senate Leader Harry Reid, and their gaggle of criminals and traitors are “offering” the American people – open wide and swallow this poison pill or be bent over and have it rammed up our collective ass.

I’m not sure, however, if the American people will decide to accept these choices. We may well refuse both to swallow Obama’s poison and refuse to meekly accept his and his Liberals’ attempt to figuratively ass rape the country. Unlike many of Obama’s supporters, we’re not OK with being “bitches” who are “punked out” for “commissary.” 😉

This entry was posted on Sunday, March 21st, 2010 at 7:00 am and is filed under Humor, Politics. You can skip to the end and leave a response. Pinging is currently not allowed.