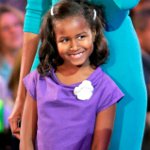 In yet another blow to President Obama’s White House, Cabinet, and Czar staffing, Sasha Obama, “The Second Daughter” has chosen to resign from her familial position at the White House.

Citing feelings of being taken for granted, Sasha Obama has decided to strike out on her own. Both a reality television series and a possible political career have been hinted at the 9-year-old.

President Obama, now used to being abandoned by his constituency, is making the best of the situation. Neither the First Lady nor the First Daughter were available for comment.

(WASHINGTON D.C.) Sasha Obama is stepping down from her role as second daughter. Following other key members of President Obama’s administration including Rahm Emmanuel and Gen. James Jones, the 9-year-old announced her resignation, effective next week.

“It has been an honor serving alongside the President and First Lady, as well as First Daughter Malia,” a tearful Sasha told reporters. “But this is a key juncture in my life and I feel it’s best for all involved that I move on.”

The resignation was expected. Insiders have hinted that Sasha was unhappy in her limited role.

In an exclusive interview with The Peoples News, Sasha confirmed that she has a reality show in the works. The third grader wouldn’t, however, say what her role would be–but hinted that it might involve running for the mayor of Chicago.

“You’ll have to watch to find out,” she said, winking.

Sasha said she found her role as Second Daughter superfluous. Originally billed as the ‘cute spunky one,’ Sasha’s public role diminished sharply after Barack and Michelle Obama said the girl and Malia would no longer give interviews.

Sasha admitted she missed the spotlight, but doesn’t think her departure will adversely affect the Obamas.

“Given the small amount of public appearances that come my way now, I’m certain Malia can pick up any slack,” Sasha said. “If Chelsea Clinton could handle it as an only child, I know Malia can.”

Trouble had been brewing for about a year, say insiders. A recent overseas trip to Spain with only Michelle and Sasha was designed to ease the tensions. Instead, the trip exacerbated Sasha’s frustration.

“Sasha thought she was going to be on the covers of all the Europe papers as the cute pixie taking Europe by storm. Instead, the press ignored her. They just focused on whether the trip was even necessary,” said a White House official who didn’t want his name use. “That was the last straw.”

The President was outwardly happy for Sasha, and said there were no hard feelings.

“There’s no way I can express my gratitude to her for so gracefully handling such a challenging role,” Obama said. “I wish her the best in all she does.”

He said the search for a new Second Daughter would begin by the end of the month. Willow Smith and Zahara Jolie-Pitts have both been mentioned as leading candidates.

With a surprised but laughing H/T to The People’s News. Thank you, Bill Matthews.

Enjoy! I hope you get as much of a laugh out of this bit of sarcastic humor as I did. 😀

This entry was posted on Monday, October 11th, 2010 at 10:14 am and is filed under Humor, Politics. You can skip to the end and leave a response. Pinging is currently not allowed.