Well, Obama’s starting off 2016 with yet another push for expanding restrictions upon Americans purchasing and owning firearms. This time, in the absence of any cooperation from Congress, he’s going to try it via Executive Orders. 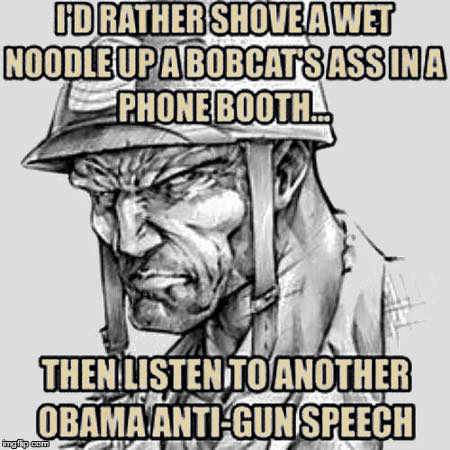 As bad as any anti-gun rant by Obama is, this one is made that much worse by that pesky memo that was released a few months back that had so many Americans upset. It clearly states, with evidence to back up each point, that no anti-gun measures that could be reasonably enacted – certainly none via Executive Orders – will have any positive effect upon firearm use for illegal violent purposes.

But then, despite whatever Obama jabbers, this isn’t really about reducing any form of firearm-involved violence. This is about Obama pandering to his constituency and making sure that gun control is the hot wedge issue of the day as we go deeper into the 2016 election cycle. And that, my fellow Americans, is what truly makes listening to- or reading a transcript of yet another Obama anti-gun speech so painful to do. The rank, cynical manipulation of the low information Liberal is just grating.

This entry was posted on Tuesday, January 5th, 2016 at 1:03 pm and is filed under Politics. You can skip to the end and leave a response. Pinging is currently not allowed.