Some creatures that infest this world defy easy classification. They dress in a close approximation of humans and have learn to mimic our speech with their foul mouthings, but cannot truly be said to have anything inside of them that is even vaguely reminiscent of humanity. They are bipedal vermin that are somehow – for reasons that totally escape me – allowed to live among people. 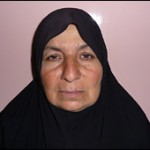 The disgusting and pernicious maggot-in-vaguely-human-form, Samira Jassim, aka “Um al-Mumenin”, The Mother Of The Believers, was recently captured in Iraq.

This thing has confessed to organizing the rapes of 80 Iraqi women so that it could later convince them that martyrdom was the only way to escape the shame.

Before it was caged Samira Jassim worked with Sunni militants from the Ansar al-Sunnah group in Diyala province of central Iraq.  It helped them rape women so that it could convince them that being a suicide bomber was the only way to remove their shame for being raped. It admits to being successful in creating 28 female suicide bombers in this fashion and delivering them to their targets.

This dangerous mockery of a human should not be tried in any court of law. One should no more extend the justice system to it than one would extend it to a mad dog, a plague rat, or a Guinea worm. But, since it has a form of intelligence and self-awareness, exterminating it out of hand does not properly serve the needs of justice either.

After that is accomplished and its wounds cauterized, it should be raped – by dogs, since it would be wrong to force men to foul themselves in it – from sunup to sundown. Then it should be exterminated by giving it a blood transfusion from a pig. After the induced acute hemolytic reaction has done its gruesome work, the thing that called itself Samira Jassim’s corpse should be dumped in the nearest cesspit.

Then mankind should deliver a similar fate to the rest of the nest of Ansar al-Sunnah. The sooner their breed is made extinct, the sooner their foul stench will clear from Earth’s atmosphere. Remember always, war is waged against other men; this would be cleansing, a needful currettement that eliminates an infectious disease.

This entry was posted on Wednesday, February 4th, 2009 at 2:15 pm and is filed under Politics, Society. You can skip to the end and leave a response. Pinging is currently not allowed.

4 Responses to “Raped By Dogs”