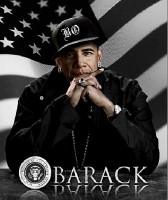 Most Americans have noticed and commented against the sad fact that, whenever Muslims attack Americans, Obama first thoughts, words, and actions are in defense of Muslims, not in defense of the vast majority of Americans. It truly seems to almost everyone that Obama is far more concerned with defending Muslims from Americans than in defending Americans from Muslims.

What seems odd to me is that Americans are shocked by this behavior.

To me, that Obama defends Muslims instead of Americans is to be expected and follows a solid logic train. At the end of the day, Obama is nothing but a Black male. No matter how well-tailored and expensive the suit you put him in; no matter how well-spoken and lacking in Negro dialect he is; no matter what levels of wealth, power, and privilege he has be granted; despite even his well-heeled White upbringing, Obama is a Black.

As a Black its nigh on impossible for Obama to not defend the Muslims first, last, and foremost. The boy can’t look at Muslims, a demographic possessed of both appearance and behavior far different from the American norm – which is, of course, too White for Obama’s comfort – without it calling up visions of the past oppression, both factual and manufactured, of his own people, the Blacks. Of course, Obama’s immediate response to yet another act of Muslim terrorism is going to be to try to shield Muslims from any backlash. He can’t help himself; shielding the “other” from the “norm” and blaming the latter’s “racism” for any harm they suffer is part and parcel of Obama’s culture and very identity.

This entry was posted on Sunday, December 20th, 2015 at 8:03 am and is filed under Politics. You can leave a response, or trackback from your own site.