It’s taken 50 years of ongoing decline, but the long, slow death of America has stumbled and trudged apace. 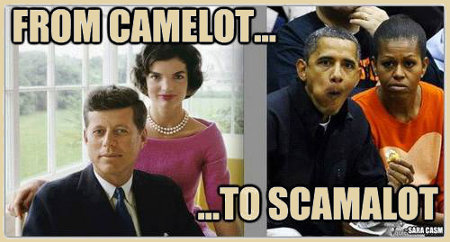 Not only has Camelot fallen, it has no been openly mocked and lampooned in the installation of Obama as POTUS. Truly, we have gone from Kennedy’s Camelot to Obama’s Scamalot. Even the men of Monty Python fame couldn’t more turn a legend on its ear.

Le Morte d’AmÃ©rique indeed! But there will be no grand and high prose such as Sir Thomas Malory penned. This lament will be written in banal soundbites by the MSM.

This entry was posted on Thursday, December 4th, 2014 at 5:56 am and is filed under Politics. You can skip to the end and leave a response. Pinging is currently not allowed.

One Response to “Le Morte d’AmÃ©rique”