Liberals an Progressives, and all those sorts who feed off their efforts, have some unusual and quite laughable ideas about charity and what it constitutes. 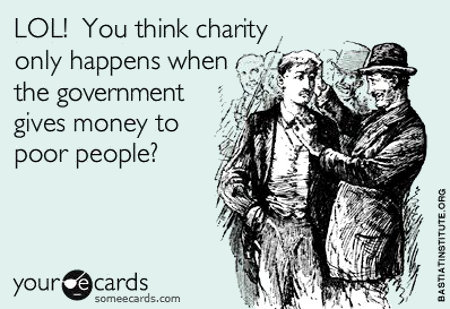 Of course, it’s so very much easier to be charitable with other people’s money.  Really! It is; just ask a Democrat. 😆

The Left’s and their minority tenants’ views on charity are, however, based upon more than just using other people’s money instead of their own. They hate and despise the very concept of charity itself because it’s voluntary, involves personal choice and is an act of charity, which they view as yet another example of “Privilege.”

This entry was posted on Saturday, October 20th, 2012 at 8:12 am and is filed under Humor, Politics, Society. You can skip to the end and leave a response. Pinging is currently not allowed.