Damn! This is a racist cafe. It must be own by a Klansman or soldier in the Aryan Nation because that’s one nasty, racist sign in the window. 😯 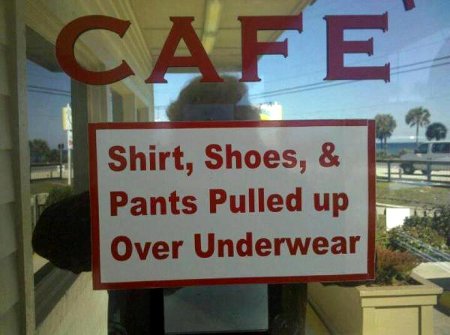 That’s Going To Have A Disproportionate Impact Upon Blacks!

The owner has to know that his prohibition on “sagging” will have a disproportionate impact upon Blacks and is, hence, racist despite the facially neutral nature of the stricture.

Federal courts have long held that motive and purpose were and are irrelevant and that even de facto and de jure nomenclature are meaningless as a defense against charges of racism. Only the end result, unburdened by circumstance or context, matters.

Since “sagging” is based upon prison behavior and Blacks are disproportionately prone to criminality, and because they have a culture based upon glorifying criminal behavior, they are the ones most likely to be wearing their pants belted well below their butts. Hence, Blacks – especially young Black males – will be the ones most likely negatively impacted by this cafe’s dresscode.

See…It’s a racist cafe because it’s racist to compel Blacks to comport themselves with the same manner and level of decorum as Whites. 😉

This entry was posted on Friday, April 27th, 2012 at 1:20 pm and is filed under Humor, Politics, Society. You can leave a response, or trackback from your own site.

5 Responses to “A Racist Cafe”