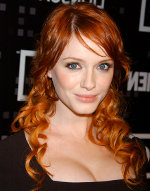 In a recent sarcastic / humorous post I displayed an image of a fake magazine cover featuring voluptuously curvaceous actress and model Christina Hendricks. In it there was the headline:

I’m fairly sure that most women would be concerned about that if it was actually thought to be happening instead of being part of a snark.

Admittedly, Christina Hendricks and her “epic prow” have breasted their way through the turbulent seas of Hollywood and into firmly the “hearts” of many men and women.

Firstly, the half-British, size 12 (size 14 UK) actress has a much more believable and frankly female figure than the stringy sticks that Hollywood and fashion industry normally prefer. Secondly, she has a much healthier physique than the Hollywood or fashion world norm.

On other hand – pun intended – these men could being jerking off looking at these heroin addicted skeletons dipped in wax, which might indicate that they have either have a closeted fondness for prepubescent boys or a Nazi concentration camp sexual fetish:

Myself, I prefer bedding women and have no desire for either young boys or emaciated, mentally deficient or damaged creatures who strive to look like them. I also have no respect whatsoever for anything with a prick that holds a contrary opinion. I’d be far more likely to gut shoot such latent or closeted pedophiliac filth than to bother listening to whatever vile drivel they mouthed by way of justification for their base perversion.

This entry was posted on Thursday, August 5th, 2010 at 12:41 pm and is filed under Society. You can leave a response, or trackback from your own site.