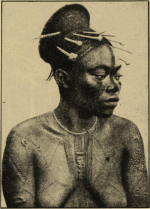 There is a belief that “beautiful” is “White” that many girls and women around the world subscribe and adhere to. The media portrayal of images that support this ideal has promulgated the American and European beauty ideal; pale to fair skin, long straight hair – blond is best – light eyes, slim nose, and a skinny figure.

In other words, Black models have to be an exotic twist upon normative White features in order to be considered beautiful and employable.

For the most part even the “passable” Black models are consigned to double bookings with a White model and/or to modeling exotica and “urban” fashion.

This has naturally led to Black girls and women being presented with a beauty ideal that they are genetically and physical incapable of fully meeting, though many people were willing to make money selling them “treatments” to get them a little closer to it.

In the U.S. specifically, many Black women were faced with a beauty ideal that did not resemble the reflection in the mirror. Many entrepreneurs began and sustained successful businesses based on selling the white ideal to the Black woman. Skin lightning became a common practice in the Black community

— Kathy Russel
The Color Complex:
The Politics of Skin Color Among African Americans

That’s a crying shame since – leaving all the societal ills caused by cultural self-image problems aside for now – there’s many, many different roads to beauty and/or sexiness and Black women who look like any of the myriad varieties of Black women can and have traveled many of them.

Sadly, I have to point out that while these three relatively successful models: Phenyx Rose, Esther Baxter, and Buffie Carruth, are all beautiful Black women with darker skins, more classically African features, and figures of differing the “White ideal,” they do all possess straight hair either through genetics or chemical artifice. I could not find Black pin-up style models who didn’t have “good hair.”

They are each, however, examples of beautiful and quite sexy Black women who can’t “pass” as an exotic twist to the media and fashion industries’ beauty ideal.

This entry was posted on Saturday, March 26th, 2011 at 1:45 pm and is filed under Society. You can skip to the end and leave a response. Pinging is currently not allowed.