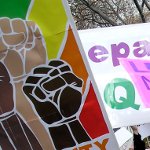 Have you ever wondered why the Liberals couch each and every one of their arguments and demands as a Civil Rights issue irrespective of the specifics of their agenda of the moment?

The answer to that is simple; the Civil Rights Movement and resultant changes to America was the Liberals’ one great victory over the perceived will of the majority of Americans.

Given that fact, it makes logical sense that the Liberals would claim everything and anything that flies in the face of the will, beliefs, and sensibilities of the American people was a civil rights issue.

So why Civil Rights? Because it’s the only argument that they have that they think might work to force their agenda upon we, the People.

This entry was posted on Tuesday, September 14th, 2010 at 8:44 am and is filed under Politics, Society. You can leave a response, or trackback from your own site.

7 Responses to “Why Civil Rights?”