As all Americans know, Obama and the Liberals and Progressives whose ethnoguiltism and oikophobia forces them to support his regime hate all the Newscorp outlets but especially hate and fear Fox News. 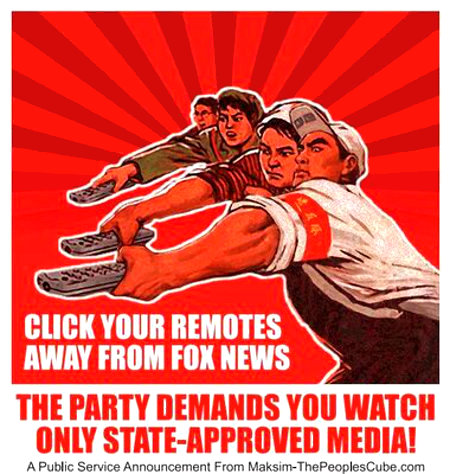 Turn The Channel, Prole! Fox News Is Not Approved Viewing

Now, despite their motto, Fox News is less Fair and Balanced than it is providing balance for the Leftist lamestream media, though it still manages to be more balanced and fair than the rest of the MSM.

This, of course, perfectly explains why both Obama and the Leftists polluting and befouling America hate Fox News so much. They cannot abide dissent in any form because opinions or facts that contradict the dogma of the collective cannot be tolerated; the collective cannot survive it parts becomes selves.

This entry was posted on Tuesday, February 12th, 2013 at 11:14 am and is filed under Politics. You can leave a response, or trackback from your own site.

2 Responses to “Turn The Channel Now!”