Certain sorts are obsessed with the President’s golfing and with trying to make something evil out of it, e.g. CNN’s recent #TruckGate conspiracy theorizing. Of course, these same sorts are also pathologically obsessed with declaring that anything and everything that our President says or does – or doesn’t say, or doesn’t do – is wrong, stupid, and evil…Oh, yeah, and racist of course. 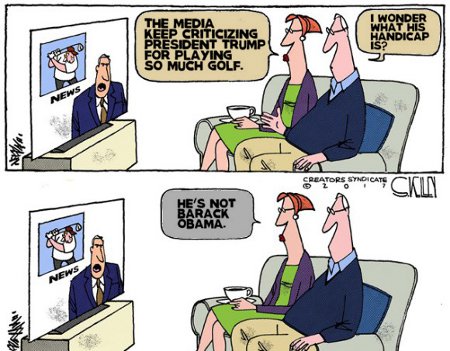 That’s the sad and horrific truth of it. President Trumps isn’t 2.8 as the USGA Handicap Index official rates it; it’s that he’s not Obama…and also not Hillary Clinton, whose destiny he is thought to have stolen.

To be fair though, some people nonsensically had issues with Obama’s golfing as well. The difference being the level of hatred involved being far greater now and the inclusion of the MSM in the vanguard of those ranting about it. But then this is part of President Trump’s handicap; the Lamestream Media has long considered themselves America’s kingmakers and Trump’s election blew that self-aggrandizing fantasy out of the water, as did his shining the light of public awareness upon just how much of what they “report” is Fake News.

This entry was posted on Sunday, January 14th, 2018 at 7:11 am and is filed under Politics. You can skip to the end and leave a response. Pinging is currently not allowed.