The Theory Of Duh

America has suffered another tragedy involving firearms and, as is woefully and tediously predictable, the gun grabbers are using the Aurora massacre as an excuse to call yet again for the disarmament of the law abiding citizenry of America.

To give these liberty-hating Leftists credit though, this time they did wait a few days before starting up their tirades. For that unprecedented bit of respect for the fallen they should be lauded.

What these sorts refuse to understand is two-fold. Firstly, our Founding Fathers intended for the American people to be armed. Secondly, no amount of gun control will positively effect the number of gun-related crimes in the nation. 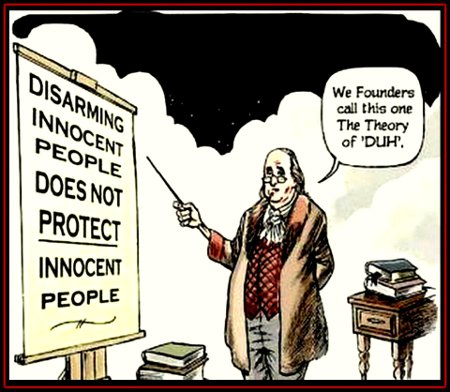 We Call This The Theory Of Duh

And believe this; their fault does not stem from ignorance. It stems from a combination of not caring for- or about what America is and was intended to be and from refusing to accept proven basic human nature and the criminal mind.

As It Was Intended

That the brave and wise men who created the United States of America intended for the populace to well and always armed is well documented and I could cite the writings of many of those men as proof of this.

There is, however, no point in doing so in this post. Americans know that history and the gun grabbers don’t care about what the Founders said whenever it conflicts with what they desire.

Suffice it to say that it was always intended for the American people to be able possess and carry such arms are were deemed by them to be sufficient for their own security, whether it be against foreign aggressors, common criminals, or against their own government. The latter potential threat seeming to be the most grave and the most likely to be realized in the minds of most of the Founding Fathers.

Disarming The Innocent Provides No Security

It’s a simple fact that all laws only deter the law-abiding members of an population from a given activity. It is also a simple fact that criminal obey gun control laws in the same way and with the same vigor that politicians obey and follow their oaths of office.

In actuality, all the Left’s arguments about fewer firearms in the hands of normal citizens resulting in lower crime rates are false. FBI statistics matched against gun control levels in the several states shows no correlation whatsoever between the ease of legal access to firearms and violent crime rates.

All that disarming the general population achieves is making them easier prey for those individual who are criminal by nature by eliminating their means of protecting themselves, their families, and their property from attack, either from criminals or a government gone bad.

The Price Inherent In Liberty

But always understand that there is a price inherent in any form of liberty. That price being that one must deal with the facts that some people will abuse their freedoms and cause harm and/or unrest. This is as true of gun rights as of any other right or privilege.

For myself, though I believe the vast majority of Americans share this view, I would rather experience the inconveniences caused by people misusing the freedoms than those engendered by the lack of such freedoms.

This entry was posted on Thursday, July 26th, 2012 at 8:57 am and is filed under Politics, Society. You can leave a response, or trackback from your own site.