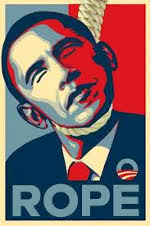 Obama’s favorite boy, Eric Holder stated bluntly that he, as the US Attorney General, maintains that Obama has the right to murder any American he sees fit to murder, even on American soil, whenever he sees fit to do so and to use armed drones to commit that murder if he chooses use them to do so.

As long as these thugs-in-suits understand that Equal Protection means that these are reciprocal rights and that they and their families are subject to them as well, I find that I’m not too adverse to accepting that Obama has the right to kill at will and without oversight.

Of course, Holder claims that Obama would only exercise this right in the most dire extreminity…so we’re all safe and there’s no reason for us to defend ourselves. 😉

America’s government of the people, by the people, for the people, shall not perish from the earth – but tyrants, those of the blood of tyrants, and those who support them may very well do so.

This entry was posted on Thursday, March 7th, 2013 at 11:05 am and is filed under Politics. You can leave a response, or trackback from your own site.