A Queer Turn Of Events 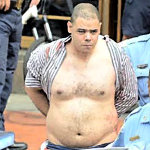 In a queer turn of events 28 year-old Floyd Corkins, the fat, ugly faggot or pro-queer, anti-Christian, anti-American, terrorist wannabe attacked the HQ of the Family Research Council (FRC), shooting and wounding the security guard who prevented this filth’s murderous rampage.

Not that this is in the least surprising. The steadily growing trend of Liberal violence made this outrage an inevitability.

It was only a matter of time before the queers and their enablers resorted to violence against Americans, especially Christian Americans. They’re hate-filled and mendacious propaganda and the Lamestream media’s complicity in spreading it guaranteed that Corkins would act out as he did and that he’ll be only the first queer to do so.

Nor is it in the least bit surprising how the Lamestream media has (mis)handled this hate crime and terrorist assault. It doesn’t sit well with their sensibilities or fit their agenda to fairly and impartially report an incident such as this. It does, however, fit their agenda to misreport it in an egregious a manner as they think that they can get away with.

Be absolutely assured though that, if the tables were turned – and I hope and pray that they are and soon – and it a queer group or one of the Godless lawfare groups were attacked, the media would be gleeful in its attempts to attack any and all American or Christian groups for their “hateful rhetoric.”

This entry was posted on Friday, August 17th, 2012 at 12:09 pm and is filed under Politics. You can skip to the end and leave a response. Pinging is currently not allowed.

2 Responses to “A Queer Turn Of Events”