As I’ve mentioned before, Obama had little, if anything, to do with America’s recent economic meltdown. The foundations for that were laid decades ago. 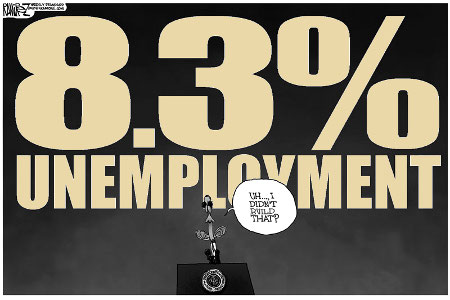 The boy is, however, the primary – though not sole – cause of the continued unsustainable unemployment rates in America. It is his policies and, even more so, his rhetoric of “eat the rich” and class warfare that has American businesses too scared of the near-term future to invest their warchests in expanding their businesses domestically and hiring more American workers.

Once again though, while Obama built that, he didn’t in any way that I can see architect it. He was and is nothing more than day laborer hired to pile bricks unto the back of the private sector by those individuals and groups who stood to gain from a weakened American private sector, expanded public sector, and a dependent population.

In any event, the situation will not improve – abiding by the law of change, it may well worsen – until Obama is, by one means or another, removed from office. It might not even change with any rapidity then due to how badly damaged our economy is now and how much companies have had to adapt to survive that damage.

This entry was posted on Tuesday, August 14th, 2012 at 4:16 pm and is filed under 2012 Election. You can skip to the end and leave a response. Pinging is currently not allowed.