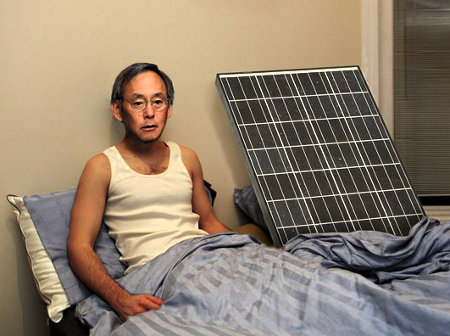 WASHINGTONâ€”Sources have reported that following a long night of carousing at a series of D.C. watering holes, Energy Secretary Steven Chu awoke Thursday morning to find himself sleeping next to a giant solar panel he had met the previous evening. â€œOh, Christ, what the hell did I do last night?â€ Chu is said to have muttered to himself while clutching his aching head and grimacing at the partially blanketed 18-square-foot photovoltaic solar module whose manufacturer he was reportedly unable to recall.

This entry was posted on Wednesday, December 18th, 2013 at 9:18 am and is filed under Humor, Politics, Technology, The Environment. You can skip to the end and leave a response. Pinging is currently not allowed.